Clovelly has been awarded *GOLD* for Britain in Bloom South West 2015!  …Why am I writing about this? Well, for three reasons:

1.  Earlier this year, I found myself at the helm of an exciting and creative project, Yarn-bombing Clovelly as part of our ‘In Bloom’ effort!

2. Yesterday I was lucky enough to attend the Britain in Bloom Award Ceremony, where Jonathan Dimbleby presented the Clovelly Community Gardening Group with our *GOLD* award!

3. I’m incredibly proud of the hard working Clovelly residents who put their hearts and souls into ensuring the famous fishing village, which we are so privileged to call home, remains picture-perfect for residents and visitors alike.

Watch: Clovelly Yarn-bombing on ITV (Watch out for me!) https://www.youtube.com/watch?v=wBEYLEeDaYo

Raising money for the RNLI and Children’s Hospice South West, this colourful project was inspired by the Britain in Bloom competition and was coordinated by me at our Clovelly Silk workshop, for the Clovelly Community Gardening Group. 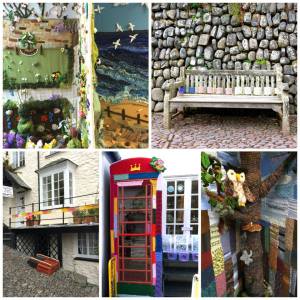 We even yarn-bombed our telephone box!

Our tight-knit (pun absolutely intended!) community of Clovelly residents yarn-bombed the village with the help of people from all over the UK and abroad, who donated beautiful woollen samples.

Colourful displays adorned familiar sights in this traditional fishing village, which is so popular with holidaymakers from across the globe.

In October 2012 Clovelly suffered a flood. As a torrent of muddy water rushed down the famous cobbled street, it left a trail of destruction.

The misery of the flood failed to dampen the spirits of Clovelly residents and as people pulled together, Clovelly Community Gardening Group was formed.

The clean up and recovery was so swift and profound that Clovelly entered the annual South West In Bloom competition.  A regional competition which is part of Britain in Bloom, the largest horticultural campaign in Europe. Taking part in the competition has inspired many exciting projects over the past few years with a real emphasis on the pride and community spirit which is so strong in Clovelly. 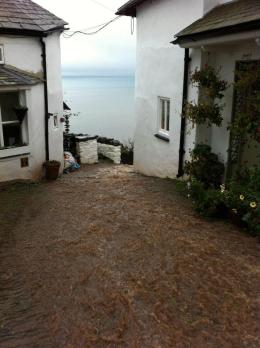 Clovelly is a place which people all over the world hold very dear to their hearts and thanks to social media we were able to invite people who love Clovelly to donate knitted and crocheted samples and therefore contribute to this unusual project. We received samples from all over the UK and abroad, and we were overwhelmed by the standard of the knitted and crocheted pieces which we received. 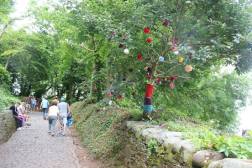 A knitted mermaid at Clovelly Silk!

Our Clovelly Silk workshop was the centre-piece for some very special knitted work indeed, with the breathtakingly beautiful and inspiring knitted creations of Alison Murray who lives locally and has worked tirelessly to inspire her team of local knitters, who have created awe-inspiring pieces including a 25-foot high Christmas tree, walk-in Gingerbread House and recent project, the ‘Above & Below The Waves’ installation which has been touring the UK over the past year and has so far raised over £15,000 for the R.N.L.I.

All ages were involved, with toddlers and school children helping, as well as textile groups and individuals too.

People took such care and were so generous to donate their beautiful pieces ~ We were absolutely thrilled.

Watch this space for Clovelly Yarn-bombing 2016!

Yarn Bombing is a type of street art that employs colourful displays of knitted or crocheted yarn or fibre rather than paint or chalk. Yarn bombing is generally about reclaiming or personalising public places. Yarn installations can be easily removed if necessary.